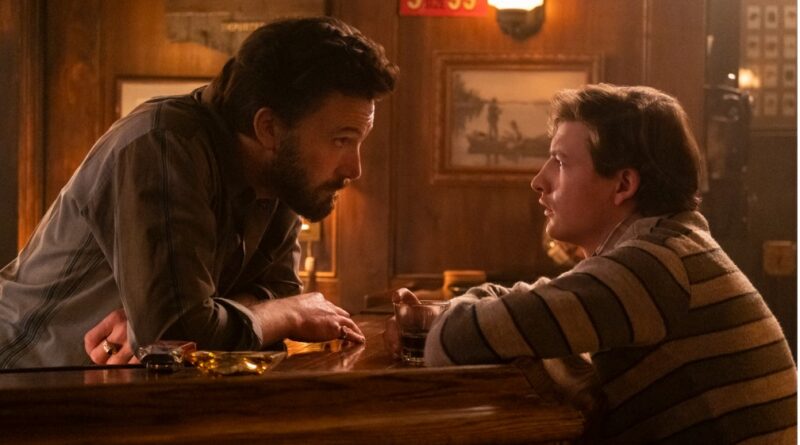 In 1972, 9-year-old J.R. Maguire spends hours scanning the airwaves for The Voice, his name for the radio deejay father who deserted him and his mum years earlier.

As he dreams of the day when they can be reunited, he and his fiercely protective mother Dorothy (Lily Rabe) live with her family in his curmudgeonly grandfather’s (Christopher Lloyd) rundown house in Manhasset, Long Island, both working tirelessly to fulfill her dream of an Ivy League education for J.R..

Hungry for male attention, the boy finds comfort at the nearby Dickens pub, where the man behind
the bar is his Uncle Charlie (Ben Affleck). A self-educated truth-seeker with a closet full of classic books and a thirst for knowledge, Charlie takes the boy under his wing, encouraging J.R.’s aspirations of becoming a writer.

As J.R. grows to young adulthood with sporadic contact with his birth father, Charlie guides him
through the mysteries of manhood and includes him in bowling nights, ball games and trips to the beach with his loyal band of quirky friends.

But when winning a scholarship to Yale, falling in love with a brilliant and beautiful classmate and
getting his dream job still does not seem like enough to J.R., he retreats once more to the bar, only to discover he already had everything he needed in order to claim his own dreams.

Directed by George Clooney, The Tender Bar captures the heartache, vulnerability and humour of a boy’s struggle to become a man.

The Tender Bar is directed by two-time Oscar® winner George Clooney (Good Night, and Good Luck, The Ides of March) from a screenplay by Oscar winner William Monahan (The Departed, The Gambler) and adapted from the memoir by Pulitzer Prize-winning writer J.R. Moehringer (Resurrecting the Champ).
The film stars Ben Affleck (Argo, Good Will Hunting), Tye Sheridan (Mud, The Card Counter), Lily Rabe (Miss Stevens, American Horror Story) and Christopher Lloyd (Back to the Future.

Pulitzer Prize-winning journalist J.R. Moehringer’s memoir The Tender Bar was published in 2005 and lauded for its lyrical depiction of a hard-knocks upbringing spent searching for the nomadic father who abandoned the author as a young child.

Moehringer’s loving portrayal of his fiercely ambitious mother, his miserly grandfather and, above all, his charismatic Uncle Charlie and the barflies at the pub where Charlie pours drinks is by turns poignant, raucous, hilarious, hopeless and hopeful. In other words, perfect fodder for an unforgettable coming-of-age film directed by George Clooney.

Clooney and his producing partner Grant Heslov received a copy of the script, adapted by Oscar-
winning screenwriter William Monahan, from producer Ted Hope, who was then an executive at Amazon
Studios. “It’s the story of a not-privileged kid deciding to do the fundamentally impossible,” says Monahan.

“But beneath the ordinary world, it is kind of an epic. It’s the very rare first book by a writer who doesn’t throw family and friends under the bus after chewing them up for material. It says of the family, I am them and they are me.

“J.R. had a very supportive, very loving family,” he adds. “They got him into Yale, they helped him,
they compensated for his lack of a present, decent father. And in the end, despite his searching, he realises that he always had a father — his Uncle Charlie, and even his grandfather. There’s something heroic in his story.”

Heslov had read the book before it was published, and loved it so much he tried unsuccessfully to
option it at the time. Although Clooney was not familiar with the memoir until after he read the script, he was instantly won over. “The version we received was a tremendous adaptation of the book,” he recalls.

“Bill Monahan’s a really great collaborator and a really smart writer, whom we admire greatly. When you have a really wonderful screenwriter like that, you can’t go wrong.”

Clooney and Heslov are both around the same age as Moehringer, and their connection with the material was strong and immediate. “So many of the elements of J.R.’s childhood are things I share with him,” says Heslov. “It just resonated with me.”

Clooney felt an even more specific kinship to the material. “Growing up in Kentucky, which is
nothing like Manhasset, I had an Uncle George who I was named after,” he says. “George lived above a really beat-up old bar. When I was 9 or 10 years old, which is the exact time period in which the early part of the movie is set, he’d give me 50 cents to go get him cigarettes from the machine and a can of beer.

So I grew up in and around a bar like the bar in the film, with all the wild characters that called me ‘kid.’” Turning a 400-page memoir into a two-hour movie inevitably involves some changes. And Clooney,
who with Heslov has made several other projects based on books, including Syriana and Catch-22, knows from experience that a screenplay can never be exactly the same as a book.

“They’re two completely different animals,” he says. “A book will tell you what someone is thinking, and a movie has to show you. But we think we stayed true to the essence of the book. The Tender Bar is still a story about class, about being raised in a bar and about the intimacy of family.”

Despite the changes, Moehringer agrees that many of the important themes of his memoir remain.
“The lost father,” he says. “The particular loneliness of being an only child of a single mum. The search for surrogates. The terror of being at an Ivy League college — any college, really — and feeling that you don’t belong, academically or socially or both.”

Clooney has starred in some of the films he’s directed, while remaining strictly behind the camera in
others, as he did with The Tender Bar. “That simplifies the job for sure,” he says. “This was an easy one to direct anyway because it was a really good script, we had really wonderful actors and we had a great crew. I just loved all these characters. It’s The Wizard of Oz in a way. J.R. is constantly looking for happiness and his place in the world, and it’s right there all along. I think that’s a voyage we all enjoy watching.”