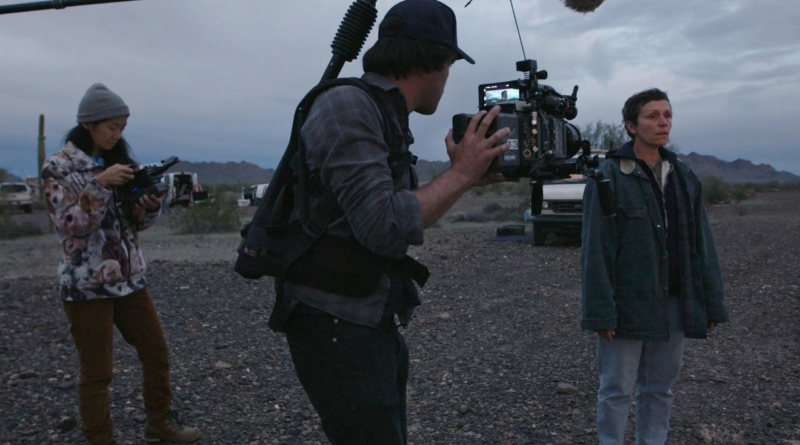 As Zhao immersed herself in the project, she thought about what kind of film she wanted to make. She decided to draw on her traditional methods, but to challenge them at the same time.

“I’ve done one type of film before,” says Zhao, “and I know what I’ve learned to be somewhat good at it, and I didn’t want to let go of that. Instead, I wanted to keep building on it. At the same time, I was curious about what else I could do that hasn’t been done very often.”

“Fran came to me just as a producer, and from the very first day she asked me if she should even be a part of the project as an actress,” continues Zhao. “The thing is, I felt that this wouldn’t be an easy sell to the audience. With The Rider, it was cowboys, it was a ‘western.’ But this is harder – there’s an ageism in this country, a prejudice against stories about older people and people on the periphery of society.

“So, I thought – if Fran agrees we could bring attention to this seamlessly. From the beginning, it was always for me a pragmatic decision. But at the same time, it was the creative challenge I was curious about.”

“I think almost immediately it became exciting for Frances to think about how to make this a different sort of movie,” says Spears, “with this kind of filmmaker.”

“As Fern, I ‘worked’ alongside the actual workforce at an Amazon fulfillment center, a sugar beet harvesting plant, in the cafeteria of a tourist attraction and as a camp host in a National Park,” says McDormand. “In most cases, I was not recognised as anyone other than another worker.  Of course, I did not really work the hours that are required at these jobs.  But we did try to give the impression of real work and its consequences:  the physical challenges and discomfort for an older person but also the joy of working and living in nature as a camp host and the feeling of purpose and the income available from all these jobs.”

Zhao enjoyed worked closely with McDormand to bring it all to life. “Fran and I spent a lot of time together before we hit the road and I got to know so much about her. Fran is not the kind of actress that likes to just talk forever about the character. She likes physically doing things, she likes tangible things. So, we really hit it off in that sense,” says Zhao.

“Chloé immerses herself in her subjects’ life-narratives and looks for ‘the hook’ that gives her the dramatic arc for a film,” adds McDormand. “Our process on Nomadland was a challenge for both of us because we were imposing the hybrid of non-professionals from the nomad community and David Strathairn and I as professionals acting our roles.  However, Chloé and Josh, our DP, spent time with David and I and our families in the small town we live. Chloé kept notes of our lives, our interaction with each other as friends and developed her idea of Fern and Dave from that.”

Zhao and McDormand also worked closely together on building out Fern’s nomadic home on wheels – a Ford Econoline van that McDormand named Vanguard. “We were thinking: how would Fern structure the living space?” says Zhao. “When you live in that small a space, what you take with you says a lot about who you are, more than when you live in a house.”

“In collaborating with Chloé on the character of Fern,” says McDormand, “we talked a lot about how we were going to bring things from my life into Fern’s life, and a lot of that had to do with my background, but also just everyday activities. I suggested crafts, because it’s a way to spend your time when you’re on the road and it’s a way to make practical things that you need – things for bartering on the road. I brought along my bag of potholder loops, the loom and the hook—I probably made about 75 potholders that I gave to different people on the road and to members of our company. And they were props.”

Says Zhao, “Because we wanted to incorporate non-actors into the film and have them be themselves in the moment, then Fran had to somehow be herself in the moment as well, because she couldn’t know what they were going to do. That’s why the film has so much of her in the character.”

“On Songs My Brothers Taught Me,” says producer Mollye Asher (Songs My Brothers Taught Me, The Rider) “we went into it with a treatment instead of a script and Chloé would write scenes daily. On Nomadland, she worked the way she did on The Rider where there was a screenplay, but she would rewrite or adjust scenes, sometimes daily, based on what she was discovering as we were shooting.” But all accounts, it sounds like this technique worked very well.