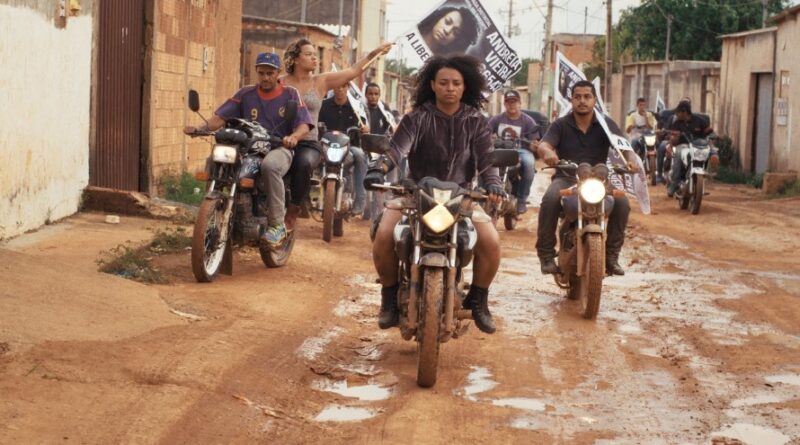 The Institute of Contemporary Arts (ICA) has announced that the Frames of Representation 2022 annual international festival, which focuses on the cinema of the real, will return between 5 May to 12 May 2022.

The seventh edition of FoR has been conceived around the theme of Communality. The festival includes eight days of screenings, in-person Q&As, discussions, workshops, experiments in sound, live performances and other activities that all explore the idea of communality through different fields of practice.

The festival will take place at the ICA based on The Mall in London. It will feature 14 films from four continents and 17 countries – all UK premieres. Tickets are available now.

Listen to Nico Marzano, the ICA’s Head of Cinema and Festival Curator, talk about what people can look forward to at the festival on the Movie Makers Show, which will be aired at 6pm on Monday, 18 April.

• Dry Ground Burning (Mato seco em chamas) by Adirley Queirós and Joana Pimenta, which opens the festival on Thursday 5 May. This pulsating TerraTreme film explores the turbulence of contemporary Brazil through the prism of a women’s gang in a favela.

• When There Is No More Music to Write, and Other Roman Stories, by Éric Baudelaire, which closes the festival on Thursday 12 May. This essay work brings together avant-garde composer Alvin Curran with footage of the armed struggle of far-left movements in Italy.

• Saturday 7 May presents two films composed primarily or exclusively of archival and found footage: Riotsville, USA by Sierra Pettengill, which highlights the gradual militarisation of the American police; and Journal of America (Journal d’Amérique) by Arnaud des Pallières, a dreamlike, wistful view of 20th-century life in the USA.

• New works from Latin America: Eduardo Crespo’s The Delights (Las Delicias) (Saturday 7 May), an immersion into life among 120 teenagers at an Argentine agrotechnical boarding school; and Lina Rodríguez’s My Two Voices (Mis dos voces) (Sunday 8 May), which addresses migration through the experience of three women who have relocated from Colombia and Mexico to Canada. The two filmmakers will also deliver a workshop on filmmaking practices in the context of the region’s turbulent political times (Friday 6 May).

• Brotherhood by Francesco Montagner (Wednesday 11 May), an intimate work shot over four years portraying the aspirations of three Bosnian brothers to escape traditional values – and winner of the Golden Leopard at the most recent Locarno Film Festival.

As Nico Marzano, the ICA’s Head of Cinema and Festival Curator, says: “FoR22 investigates how filmmaking can provide both foundation and inspiration for collective action. The 14 premieres address the cinema of the real and its practice as spaces within a larger community that encompasses both filmmakers and their audiences, considering the place and responsibilities of the filmmaker within that community. The festival continues to address film presentation as a space to rethink the terms of engagement and collaboration through forms of imagination, care and solidarity.”

FoR22 celebrates collective action and artistic endeavour. Through the focus on communality, it offers a stage for both engagement and reflection, and looks at documentation and representation as an ensemble of practices through which audiences can shape and elicit their own meanings, causes and effects. The festival shows how interaction with others can provoke the proliferation of new communal spaces, allowing each and any person to find their own space, form of representation and means of artistic production while in conversation with other members of their communities.

Sound will find a newly curated space within the festival through a second collaboration with Bethlehem-based Radio alHara, a global collective of sound artists and musicians who have come together to unify their sound for Palestine. The collective will experiment, create and produce a radio programme responding to the theme of communality with a week-long residency in the ICA Studio, streaming live on their online global platform.

PROGRAMME OF FILMS AND SPECIAL EVENTS:

Two sisters living on the margins of society form an exclusively female gang to seize an oil pipeline on the outskirts of Brasilia. Their resistance towards the state unfolds into their gradual withdrawal from the political turmoil shaping contemporary Brazil.

Friday 6 May
6.15pm
Workshop: Latin American Realities with Eduardo Crespo & Lina Rodríguez
Crespo (The DelightsMy Two Voices), two filmmakers from Latin America presenting work at FoR22, join us for a participatory conversation that will address the impact and responsibility of filmmakers in depicting the region’s turbulent political times.

Saturday 7 May
2.15pm
The Delights (Las Delicias) + Q&A
dir. Eduardo Crespo, Argentina, 2021, 65’
UK premiere
Las Delicias is an agrotechnical boarding school that provides a home for 120 teenagers in rural Argentina. Their lessons and encounters bring them new skills and knowledge – and also foster shared sensibilities, politics and perceptions of the world into which they’re growing up together.

7pm
Riotsville, USA + Q&A
dir. Sierra Pettengill, USA, 2022, 91’
UK premiere
Composed from archival footage of police training in mock cities constructed expressly for that purpose, the latest work from Sierra Pettengill (The Reagan Show) tackles the treacherous militarisation of the US police from the late 1960s until today.

7pm
My Two Voices (Mis dos voces) + Q&A
dir. Lina Rodríguez, Canada, 2022, 68’
UK premiere
Lina Rodríguez’s feature centres the testimonies of three women from Mexico and Colombia as they discuss their experiences of immigrating to Canada – and the effects of the process on their individual and
social identities.

Monday 9 May
6.15pm
Workshops: Field of Vision on Production & the Moving Image
Field of Vision, a non-fiction commissioning and production unit, addresses its practice in a participatory conversation exploring the ways the unit explores contemporary global issues through a cinematic lens.

Tuesday 10 May
8.15pm
This House (Cette maison) + Q&A
dir. Miryam Charles, Canada, 2022, 75’
UK premiere
Years after the killing of her cousin Tessa at the age of 14, Miryam Charles explores the aftermath through an imaginary biography of the dead girl, embodied through narration by voice artist Florence
Blain Mbaye.

Wednesday 11 May
6.15pm
Artist talk: Éric Baudelaire
Ahead of the premiere of When There Is No More Music to Write, and Other Roman Stories, which closes FoR22, Franco-American artist and filmmaker Éric Baudelaire joins us for a conversation tracing his research-based practice across printmaking, photography, publications and films.

Thursday 12 May
6.30pm
Masterclass & performance: Dirar Kalash on Sound
Dirar Kalash, founder of the Sonic Liberation Front (SLF) and Radio alHara resident, discusses the emergence of the SLF through field recordings of demonstrations, followed by a live performance
commissioned for FoR22.

8.30pm
Closing night: When There Is No More Music to Write, and Other
Roman Stories + Q&A
dir. Éric Baudelaire, France/Italy, 2022, 65’
UK premiere
The new work from Éric Baudelaire (Un film dramatique, FoR20) explores three stories rooted in Rome, from the notorious 1978 kidnapping of Aldo Moro by the Red Brigades to the life and work of Alvin Curran, the American avant-garde musician and a Rome resident since the 1960s. This screening is presented in collaboration with Spike Island.

Founded in 1946 by a collective of artists, poets and their supporters, the ICA played a pivotal role in the development of pop art and charted the course of punk, performance art and independent cinema. The ICA is an Arts Council England National Portfolio Organisation and supported by the DCMS Culture Recovery Fund.

ICA Cinema
The ICA opened its first dedicated cinema when it relocated to The Mall in 1968. Since then, the ICA’s film programme has presented the most challenging and underrepresented aspects of international narrative cinema, documentary practices and experimental moving image works that test the boundaries of film and video media, and often of the cinema auditorium itself. The ICA’s in-house distribution agency, ICA
CINEMA, was relaunched in 2016, bringing films from underrepresented and emerging filmmakers to UK audiences.

November 2, 2018 rodneyappleyard Comments Off on The Last Tree explores challenges of life in multi-cultural Britain

One thought on “Frames of Representation Festival returns to the ICA”