Loneliness, loss, love and libido are just some of the subjects explored in the 13 short films commissioned through Animation 2018, the prestigious programme from the BFI and BBC Four designed to find and support the UK’s most exciting new and emerging animators. Each of the films supported through Animation 2018 will receive production grants between £2,000 and £10,000 towards the completion or creation of an original film and the opportunity to be broadcast on BBC Four following a premiere at BFI Southbank.

The selected films take different approaches to the form, using styles and techniques ranging from hand-drawn images to live-action puppetry, stop motion, CG, 2D and 3D and covering a diversity of genres from science-fiction to documentary to celebrate and explore the medium of animation. The films will each be 2-10 minutes in duration and showcase fresh animation talent from all nations and regions of the UK.

This is the second edition of the UK-wide collaboration between the BFI and BBC Four which encourages and supports talent from a variety of disciplines. The last, Listen to Britain 2017, celebrated British documentary filmmaking and has already acted as a launchpad for a number of promising careers across broadcast and film.

Animation 2018 forms part of the BFI’s yearlong focus on animation, which celebrates the diversity, richness and innovation of British animation, through screenings and events in venues up and down the country, a new collection of 300+ archive animations available to view for free online and the release of BFI supported Early Man, the latest film from Nick Park.

Animation consultant Helen Brunsdon will be working with and sharing her expertise with the filmmakers. Helen has worked extensively in the animation industry, for numerous clients including Aardman Animations, BBC, CBBC, The Brothers McLeod as well as for Animation UK and on the British Animation Awards. Her film credits include Wife Of Bath, Morph, The Pearce Sisters, Nina Needs To Go, Children Of The Holocaust, Isle Of Spagg, Quiff In Boots. Development and delivery of the animations will be managed by independent production company Wingspan Productions which produced Listen to Britain 2017.

Emma Cahusac, Commissioning Editor, BBC Arts, says: “I’m delighted that BBC Arts and BBC Four is part of this ambitious initiative which champions new talent.  We’re delighted to be partnering with the BFI on this project and can’t wait to see what the animators have in store for us.”

Gillian Scothern, Broadcast Producer, BFI, says: “We were blown away by the quality and quantity of submissions we received for Animation 2018, and the wealth of talent across the country using animation to create boundary-pushing work. The 13 films we’ve selected use traditional techniques alongside cutting-edge technologies to tell a diverse range of stories in new and exciting ways.”

Deborah Lee, Executive Producer, Wingspan Productions, says: “We are looking forward to working with such an impressive range of up-and-coming animation talent and helping them shape their first film for broadcast. These filmmakers promise to showcase the unique potential of animation to take on complex subjects and make something impactful, entertaining and often extraordinary. Prepare to be delighted.”

The broadcast for BBC Four will be commissioned by Cassian Harrison, Channel Editor, BBC Four and Emma Cahusac, Commissioning Editor for BBC Arts.  The project is part of Culture UK – an alliance between BBC and Arts Council England, Arts Council of Wales, Arts Council of Northern Ireland and Creative Scotland, which takes a fresh approach to cultural collaborations, commissions and creativity.

This animation takes place in a ravaged London street in the midst of war. Between mounds of rubble and bomb craters stands the house of a lonely old blind man. Late one night he receives three unexpected visitors. The Three Crow Boys is an original fairy tale, exploring the nature of monsters and madness. Not for the faint hearted, this story follows in the dark footsteps of the Brothers Grimm, Charles Perrault and Angela Carter.

// _sleeper is a short animation set in a dying, industrial town both familiar and unfamiliar. This is neither future nor past, but rather somewhere lost. Somewhere other. The film uses a mix of 2D and CG animation to explore what happens to a lonely figure when a mysterious anomaly appears on the fringes of the landscape. It aims to capture the strange sense of ennui, loss and anxiety that feels appropriate for our times.

Frank told a bad joke at his new place of work. Nobody laughed. Now at 3am in the morning he is unable to sleep as he obsesses and ruminates over this social faux-pas, leading him to ponder on the nature of memory itself. This comedic look at how our brains can keep us awake at night uses a mixed media approach of live-action puppetry and expressive hand drawn animation to convey the physical world and Frank’s mental space respectively.

Meteorlight is a black and white 3D animated film set in a strange world plagued with darkness. The story follows Spudling, a sheltered character whose parent runs the factory manufacturing light for the city’s inhabitants. When finally granted permission to follow their parent into work for one day, Spudling discovers the secret of what is really powering their world…

We watch one young woman’s unconventional attempt to take control of her own love life by growing the perfect partner – a beautiful giant slug. Both freaks of nature, it’s a seemingly perfect match; until the slug is introduced to the outside world where he develops a taste for dinner parties and stimulating conversation.

In an English coastal border town, a small band of badgers live in the shadow of an animal quarantine facility. As they struggle to keep their folk traditions alive, they try to ignore the strange sounds coming from the compound. But when tragedy strikes, they are forced to seek help from the unlikeliest place. A post-Brexit dance fantasy, Quarantine is an exploration of the fears that drive anti-immigrant rhetoric, viewed through the lens of British folk tradition.

Outside the Box – Katherine Hearst and Maria Pullicino

Tody is a lonely bird slaving his life away in a packaging factory. He dreams of a better life in the sunshine with someone there who actually cares if he’s tired or overworked. When a box arrives at his station, destined for sunnier lands, Tody decides to make a break for it in order to find his paradise. The factory, however, has other plans.

A short stop frame animation following a lonely Inuit who struggles to survive after an oil tanker leaks oil off the coast of Alaska, killing all the wildlife in the area. It’s a dark comedy about companionship, loneliness and pollution.

Inspired by the poetry of Edwin Morgan where natural and domestic worlds collide and the hidden animal instincts of humans rise to the surface, this poetic visual narrative features voices from interviews recorded around the UK, woven into an evocative soundtrack. Stop motion puppets and live action footage combine to tell a dark love story.

Combining 16mm colour footage of Lagos, Nigeria from the 70s with stop motion and 2D hand drawn animation, this multi-layered animation explores autobiographical memory and the cultural elements of our earliest childhood memory. Often episodic, this recollection of personally experienced past events often emerge from as early as three years old. After the age of five, these memories become elusive. A journey back to where it all began can be both beautiful and enlightening.

Archie and Mary Harrison obsessively shave themselves.  Archie hates hair, and Mary loves Archie. In an attempt to please the love of her life, Mary suppresses her secret desire for hair. However, soon this desire starts to surface and their relationship becomes toxic.

Ladder to You – Victoria Watson and Chris Watson

Inspired by the loneliness experienced by older people in our society, Ladder to You is an insight into the life of Eric, an old man dealing with the loss of his wife. We follow Eric’s day-to-day life and become immersed in the solitude he is trying to overcome. Through his feelings and memories of better times we get to see what it’s like for the thousands of old people who live every day without any human contact. Ending with a message that love can beat despair, Ladder to You can also hopefully inspire people to give a little more time to the older folk who live amongst us. 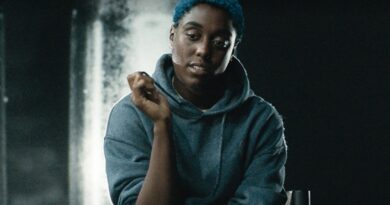 February 27, 2022 Comments Off on ACMI and the BFI Present a Season of Films from the UK’s Cinematic Vanguard

May 31, 2020 rodneyappleyard Comments Off on UK government endorses industry guidance to get film & TV safely back to work