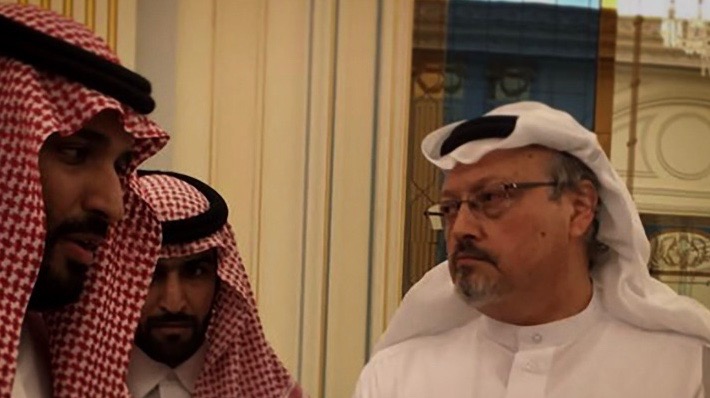 Oscar-winning director Bryan Fogel was joined at the Zurich Film Festival recently by Jamal Khashoggi’s fiancée Hatice Cengiz and Agnès Callamard, UN Special Rapporteur on Extrajudicial Exécutions, to present the film to international audiences, in honour of Khashoggi, following the second anniversary of his assassination.

The Dissident had its world premiere at Sundance Film Festival earlier this year to rave reviews. The Zurich International Film Festival was the first time an audience had the chance to see this new edit of the film with graphics by Office of Design and Development (ODD) and accompanied by the complete original score from Adam Peters, both Fogel collaborators who also worked on Icarus.

The film is an edge-of-your-seat, adrenaline-filled documentary thriller that plays out at the highest levels of power, exposing the labyrinth of deceit behind the murder of Washington Post journalist Jamal Khashoggi inside the Saudi consulate in Istanbul.

Khashoggi was a principled reformer who sought to create a more open society in his homeland, and who was ultimately murdered for his vocal opposition to the Saudi government. Featuring never-before seen surveillance footage and unprecedented access to a wealth of other damning information previously unavailable to the public.

Fogel earned the trust of those closest to the tragedy — Khashoggi’s fiancée Hatice Cengiz and the UN Special Rapporteur who led the inquiry into the assassination, Agnès Callamard, as well as Turkish police and prosecutors, cyber security experts, and a young Saudi activist with whom Khashoggi was secretly collaborating, Omar Abdulaziz — to weave together this story of courage, money, power, tyranny, love, and technology run amok.

“As we approach the second anniversary of Jamal’s death with no official repudiation, my hope is that this film will enshrine his memory as well as ensure that justice is served, and that our society no longer turns a blind eye to the brutal human rights violations committed by the Saudi regime,” says The Dissident director Bryan Fogel. “I am thrilled that the film will receive a truly independent release, detached from corporate and special interests, so that we can authentically work towards these worthy outcomes.”  Fogel’s previous film Icarus won the 2018 Oscar for Best Documentary.

“This film is a chilling illustration of what results from unchecked power,” says Thor Halvorssen, producer of The Dissident and president of the Human Rights Foundation. “he Dissident shines a powerful light on the darkness of tyranny. Dictatorships are undone by public exposure and we are committed to take this story all over the world, enlisting the partnership of the general public and civil society across the political and ideological spectrum to hold MBS and his henchmen accountable.”

“The Dissident denounces the Saudi state, but also the complicity, the silence, the apologists, and the cowards who have failed to act in the aftermath of Jamal’s execution,” says Agnès Callamard, UN Special Rapporteur on Extrajudicial Executions. “Having worked closely with Bryan Fogel for more than a year, I witnessed first-hand his deep commitment to investigating and presenting the complete picture, to memorialising the truth and to seeking justice. And all of this while being inherently respectful to those whose stories he tells. The Dissident is an irrepressible moral plea for human rights and human dignity.”

“When Bryan shared his idea to make the film, I was initially reluctant,” says Khashoggi’s fiancée Hatice Cengiz. “But as we worked together, I came to realise that Bryan believed in Jamal’s cause and values. No one has told this difficult and painful story better than Bryan. I am grateful for him, for his courage, and for immortalising Jamal with this movie. I believe it will raise awareness about Jamal’s unjust killing and remind everyone that his killers are still not punished.”

Briarcliff Entertainment are releasing the film in the US with HanWay Films handling international sales and DCM will release the film in Switzerland and Germany.

June 24, 2018 rodneyappleyard Comments Off on August 2018 at BFI Southbank

Warner Bros. Pictures and HBO Max to #ReleaseTheSnyderCut in 2021

June 15, 2020 rodneyappleyard Comments Off on Warner Bros. Pictures and HBO Max to #ReleaseTheSnyderCut in 2021