News
April 20, 2018 rodneyappleyard 782 Views
Sundance Institute and Picturehouseannounced today the programme of feature films, short films and panel discussions for the Sundance Film Festival: London 2018, taking place 31 May – 3 June at Picturehouse Central, presented in association with Adobe. General ticket sales open at 9.30am on Monday 30 April, with priority booking for Picturehouse Members opening on 9.30am on Monday 23 April. Become a Picturehouse Member now at picturehouses.com/membership.
The festival will present twelve feature films from this year’s Sundance Film Festival in Park City, Utah, U.S.A., selected for London by the Sundance Institute programming team in collaboration with Picturehouse. The festival will open with the UK premiere of Jennifer Fox’s The Tale, starring Laura Dern and Elizabeth Debicki, which paves the way for a weekend of bold female-focused stories. The festival will close four days later with the UK premiere of Leave No Trace, Debra Granik’s highly anticipated follow-up to the Academy Award®-nominated Winter’s Bone.
Amid the film industry’s current period of dramatic change and intense reflection, this year’s Sundance Film Festival: London will provide an exciting opportunity for the US and UK film industries to connect and discuss our past, present and future.  As movements such as Time’s Up and #MeToo continue to highlight inequality in the film industry, we ask #WhatNext?
With seven out of the twelve films showcased at this year’s Sundance Film Festival: London directed by women, along with a thrilling array of female leads on screen, the selection champions female voices and highlights some of the broad and excellent women-led work direct from Sundance Utah.

Among the special guests and filmmakers attending the weekend is Toni Collette, star of this year’s Time Out gala film,

Hereditary, who will participate in a post-screening Q&A. In addition to the opening film The Tale, the festival will feature the UK premiere of Desiree Akhavan’s The Miseducation of Cameron Post, the winner of the US Grand Jury Prize: Dramatic at January’s Sundance Film Festival in Utah; Skate Kitchen, an original tale of female skateboarders and the narrative debut of Crystal Moselle (dir.The Wolfpack, winner U.S. Documentary Grand Jury Prize at the 2015 Sundance Film Festival); and Augustine Frizzel’s debut, comedy Never Goin’ Back. Aubrey Plaza stars alongside Emile Hirsch and Jermaine Clement in Jim Hosking’s (The Greasy Strangler) comedy, An Evening with Beverly Luff Linn. The festival will also continue its tradition of supporting local British talent with the UK premiere of Idris Elba’s directorial debut, Yardie.
The festival’s documentary features comprise Amy Adrion’s timely work, Half the Picture, which turns a critical eye on the dismal number of female directors working in Hollywood, and Generation Wealth, Lauren Greenfield’s follow-up to the acclaimed Queen of Versailles.
Alongside the inspiring films on offer, the festival will also celebrate the work of diverse industry pioneers with a series of panel discussions, Q&As, and special guest appearances. In keeping with the What Next theme, the year’s special events programme will coalesce around the idea of creating a culture of inclusion for our film industry, whilst providing audiences an invaluable insight into the filmmaking process. Major UK film funders will join Half the Picture director Amy Adrion for “The Big Culture Shift” panel to examine what is next for the film industry and the steps needed to create a fairer and more inclusive film future.

” will see Jennifer Fox (The Tale), Debra Granik (Winter’s Bone, Leave No Trace) and Desiree Akhavan (The Miseducation of Cameron Post, Appropriate Behaviour) discuss their careers and approach to their craft, while filmmakers Jennifer Fox, Lauren Greenfield (Generation Wealth, Queen of Versailles) and Crystal Moselle (Skate Kitchen, The Wolfpack) will consider the boundaries between fiction and non-fiction filmmaking in “Art of the Real – the intersection between Documentary and Fiction”.
The 2018 festival continues the Sundance tradition of celebrating fresh work from both emerging and established independent filmmakers through two short film programmes, including a branch dedicated to UK shorts.
Following on from last year’s first Surprise Film, the programme will again include an unannounced screening which gives audiences an special chance to catch an audience hit from this year’s festival in Park City  – last year’s choice was Patti Cake$.  Additionally, Sundance Film Festival: London 2018 will continue last year’s inaugural Audience Favourite award – which was presented to the Academy Award®-winning documentary Icarus – giving festivalgoers the opportunity to vote for their favourite features, with the winner announced at the close of the festival.
Robert Redford, President & Founder of Sundance Institute, said, “The work of independent storytellers can challenge and possibly change culture, illuminating our world’s imperfections and possibilities. The program we’re bringing to London this year is full of artfully told stories that provoke thought, drive empathy and allow the audience to connect, in deeply personal ways, to the universal human experience.”
John Cooper, Director of the Sundance Film Festival, said, “The films and voices of this year’s Sundance Film Festival: London offer a creative lens to view our complex times. This is connected, relevant, global art that provides a fresh alternative to the noise dominating the cultural mainstream, and an inspiration for its future.“
Clare Binns, Joint Managing Director Picturehouse Cinemas, adds, “We are thrilled to host our third Sundance Film Festival: London at Picturehouse Central, celebrating the best independent cinema direct from Sundance Utah. In the current cinematic climate, we are proud to announce a broad and diverse programme which in this 2018 Sundance London takes pride in championing female voices and encouraging an inclusive industry landscape. Join us for an exciting offering of films, talks and special guest appearances as we continue to explore what’s next for our local and international film industry.”
More information will be available at picturehouses.com/sundance. Join the conversation on social media with #sundancelondon and #whatnext.
The 2018 Sundance Film Festival: London is supported by: Presenting Partner – Adobe; Lead Partner – SundanceTV Global; Media Partners – Time Out and Evening Standard; Event Partners – Mubi and the Utah Office of Tourism; Hotel Partner – The May Fair Hotel; Drinks Partner – Hop House Lager; and Official Provider – Picturehouse Central and Picturehouse West End.
Email AlertPlease enter your email address if you would like to receive alerts from Screen Innovation on new stories 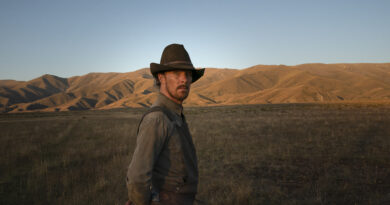 12 Oscar nominations for The Power Of The Dog