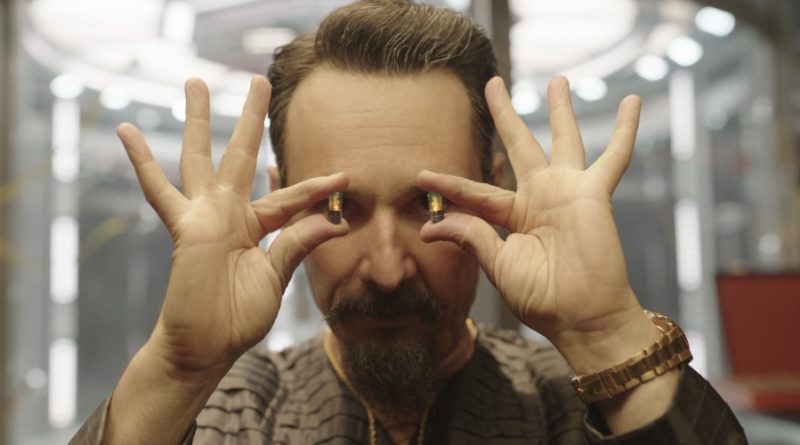 The filmmakers and the Special Effects artists talk about how they created some of the key scenes for Project Power, including the Man On Fire scene.

Henry: I remember watching movies as a kid and wondering why a character with a fire power doesn’t get burnt or the bulletproof character doesn’t have bruises — wondering how all of that worked.

Rel: We really liked the idea of a world where there are serious side effects and consequences to having superpowers.

Ivan Moran (VFX): It was pretty clear from Henry and Rel that we really needed the effects to be grounded. So I devised what the powers would look like early on and came up with these pseudoscience-y reasons why, or rather how, these powers could actually manifest themselves in people.

We really tried to be as scientific as possible about it to make it feel grounded. So the theory behind it was basically that Power amplifies subatomic resonances in internal cell structures to such a point that it manifests itself physically.

Taking Power is like turning the volume up to a million on somebody. Years ago, I was responsible for creating a CGI baby in Children Of Men that looked so real most people assumed it was an actual newborn and nobody talked about it.

So my personal preference and skill, I think, is in what we call Invisible Effects — effects that aren’t there as a showpiece, but there just to purely drive the story. Virtually every client I work with comes with the same brief, “We want it to be real.”

But what attracted me to this project, and slightly terrified me, is that there’s no spaceships, or alien planets, or magic fantasy lands to hide behind.

Yves Debono (SFX): The goal overall was to do as much as possible on camera and make it look as real as possible.

Yves: The sequence starts when Colson swallows a pill and we see for the first time what that process looks like. We actually manufactured a small device that he would put in his mouth and it would light up and CG would then enhance it as it descended down his throat.

Then we incorporated some heat elements in his jacket that would start to melt it and cause it to smoulder with these small flames. That would be the lead up before he bursts through the door and we’re now into the fire.

Mike Marino (Prosthetics): During Colson’s scenes when he’s in full fireball mode, there would be hundreds upon hundreds of prosthetics glued to his body. We layered all these burned pieces on him, with LED lights and wiring glued inside those pieces.

It was really intricate. Flaking skin, newly burned parts, old burn wounds, pieces of his jacket and clothing that were fused to his body. His face was completely burned, his eye was melted, his hair was completely melted on one side — it just took a lot of work. About 5 hours.

Colson just thought it was crazy to keep repeating this process everyday, so he actually kept his prosthetic body wounds on for five days straight. We’d take his face off, but wrap the rest up at the end of the day, and he’d just go home, fall asleep, and then come back. Took about 2 hours to put his face back on the next day.

Henry: He’d put on one of those little zippy onesies, and he went back to his hotel. His daughter was staying with him, she was on set, and she thought it was so funny.

They went out to dinner in New Orleans one night with him looking like a burn victim.

Colson: This is my third movie with Henry and Rel and I just trust their vision. So when they called me for this one, I was like, “Sure, easy. I’d love to.” It was the first time they actually cast me without my needing to read or audition for the movie.

And funny enough, this was the first time I didn’t ask any questions. I wish I would have asked a question.

Kevin Scott (Stunts): Colson was one of the biggest surprises for me in the entire movie. He showed up with a 200% attitude just wanting to work his ass off.

Rel: That all kind of comes down to Jamie. Everyone is so inspired by Jamie that nobody wants to let him down. He’s like a guiding light to all of us. So, while we’re all working hard because that’s the way we like to work, we also want to just rise to Jamie’s level.

Colson: Working with Jamie Foxx is by far the coolest thing I’ve done as an actor yet. The hours on this are really long and he just sets the tone on set by making us all feel like we’re not at work. I mean it’s inspiring.

Ivan: When it came to creating the fireball effect, often when you just try to make up something like fire from scratch, invariably it ends up looking slightly fake if you don’t have an on-camera point of reference. And you can’t quite work out why.

For Newt’s power, we found this phenomenon you can look up on YouTube called “Superheated Steam” that operates similarly to steam coming out of a boiling kettle, but is hot enough to burn a house down. So we mimicked that with the sweat boiling off of his skin and patches of fire emanating from different spots on his body.

Yves: We devised this suit with LED strips that you could program to flicker and illuminate parts of Colson’s face and other areas of his body, which were covered in full head-to-toe prosthetics by Mike. When it comes to fire, reflections are the most important things, so, the LEDs served to create the reflection of fire on his body.

We tested with the LED lights first and then we had actual handheld fire that we used to create all the reflections on the walls as he’s running through the hallway.

Ivan: But one of the other things that’s a big giveaway when you film an actor who’s supposed to be on fire, and you use CG fire on them, is that they’re not inherently illuminated by the fire.

They’re not lit up by it. And if you try and shine lights on them while you’re on set, it casts shadows and just doesn’t work. So in my head, I was like, “I have to overcome this problem. I have to illuminate them with something that’s not actually there.” Clearly I can’t light Colson on fire, so we asked stunts, “Well, maybe it could be a stunt guy on fire?”

Kevin: We took a stunt double, dressed him head-to-toe in fire retardant gear, set him on fire, and had him run through the same exact movements that Colson did. That gave visual effects the lighting they needed, which is almost impossible to replicate in CG.

Ivan: But then…my only problem with a stunt guy on fire is there’s always something weird about stuntmen on fire when you see them in movies. The trick, we determined, was to keep Colson’s face recognizable at all times. If you can keep seeing his face, we can keep the essence of his performance.

Kevin: So we did a few takes of Colson running down the hallway and then had our stuntman, to the best of his ability, run it the same exact way so VFX had what they needed to layer the effects.

Kevin: We filmed that scene in a very close, claustrophobic set at this amazing location on the west bank of New Orleans at an apartment complex that had been shut down since Katrina. It became sort of a graffiti/showcase museum if you will.

Ariel: if you’re from New Orleans, you likely know the artist who curated that whole piece. He’s really famous down there. He’s name is BMike and his work is part of the local allure.

Kevin: We were actually running down real hallways of old apartments. As far as heat, and flame, and fire is concerned, it was very claustrophobic so the fire reacted differently than it would in an open room. Dealing with fire in a close environment, the heat was a big factor, because take after take the heat in the building continued to rise.

We were fortunate to have shot it in a time period that was pretty cold.

Ivan: It was the right call. Covering Colson in CG fire would defeat the very purpose of all of Mike’s amazing prosthetics in the first place.

Mike: Late in the game, after days of wearing the body prosthetics, the LED lighting kept going out on us and the lighting guys couldn’t really figure out what the hell was going on.

So we came up with a way to lock the wires and battery packs on him and then hide the battery packs with burns and clothing and stuff.

Ivan: We’d strap it onto Colson’s skin, his underpants.

Mike: It was really a crazy thing to pull off and it just proves what a professional Colson actually is.

Ivan: We shot about all eight different special effects passes, plus the stunt fire passes, gave that to my team, and that became kind of a proof of concept.

Mike: These are all magic tricks, everything that we do is a magic trick. And if the person watching can’t figure out how it’s done, then we achieved something.